Insight into the financially harmful trends in divorce when dividing state pensions and Social Security.

The following is a case study that utilizes financial data very similar to an actual divorce that involved a Massachusetts State Pension (names and dates have been modified).  The purpose of this article is to bring to light the persistent financial harm being brought to employees of the Massachusetts State Employee Retirement System as it relates to divorce settlements. Specifically, family courts and divorce professionals in Massachusetts continue to remain fundamentally ignorant to the financial relevance of lost social security benefits by long-tenured participants of the Massachusetts State Employee Retirement System when dividing marital finances. Without changes or appropriate attention to this matter, family courts will continue to permit (whether intentional or not) the unequal division of marital income to the financial detriment of the State Employee.

Case Details: Paul and Jennifer were married in 1992 and were divorced in 2019. Paul was hired by the Massachusetts State Police in 1992 shortly after their marriage. Jennifer worked full-time in the private sector for the duration of their marriage. At time of divorce, the only retirement assets being divided were Paul’s interest in the Massachusetts State Pension and a 401k plan accrued by Jennifer.

Marital Income Facts: During the marriage, and as an employee in the private sector, 6.2% of Jennifer’s pay was withheld each week toward her future social security benefits. Those weekly deductions combined with an equal contribution by her employer, will provide Jennifer with monthly Social Security benefits at her retirement. Social Security benefits are not divisible pursuant to divorce and are therefore largely ignored in the asset-division process by divorce professionals.

Comparatively, as a member of the Massachusetts State Employee Retirement System, Paul does not contribute toward Social Security benefits. Instead, each week 8% of his pay is withheld (plus an additional 2% on pay above $30,000 annually), which ultimately is used by the State to help fund Paul’s monthly Pension at retirement. These weekly payroll deductions, like Jennifer’s, are non-elective and will go toward funding a retirement Pension.

Income Summary at Divorce: At the time of divorce, Paul had 27 years of service and a vested interest in the State Pension System. At that time, he had accrued a lifetime monthly pension payment equal to $6,752 based on his service as of the date of divorce (this is a precise estimate based on an actual case data and not a fictitious figure). Because Paul had only a limited number of years of service in the private sector (paying into Social Security System), his accrued monthly social security benefit at time of divorce was equal to just $117/month.

Asset Division Version 1: The proposed division of assets presented by their attorneys was as follows: Paul was to receive $100,000 (50%) of Jennifer’s 401k account and Jennifer was to receive 50% of the marital portion of Paul’s pension. This is essentially how most agreements are structured when a State Pension is involved. As you can see, this approach appears very equitable from an asset division standpoint (see Exhibit 1 below) with the assets divided neatly. The issue is that future income is not part of this discussion or process. 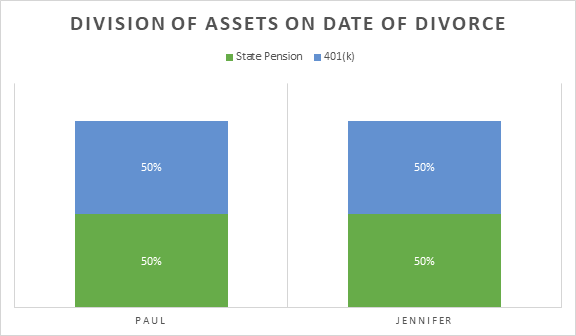 Asset Division Version 1 – The Reality: While few would argue that the 50/50 graph in Exhibit 1 above is unfair, it fails to capture the actual financial inequality that will materialize only at time of retirement. Exhibit 2 below, illustrates the impact of income distribution based on the agreed division in Exhibit 1. For additional clarity, the monthly income amounts listed in the illustration are income levels accrued at time of divorce. More specifically, these figures were not inflated or adjusted to account for estimated growth to Jennifer’s Social Security benefit nor increases in Paul’s pension that may result from continued service. Monthly amounts are representative only of what was earned during the marriage. 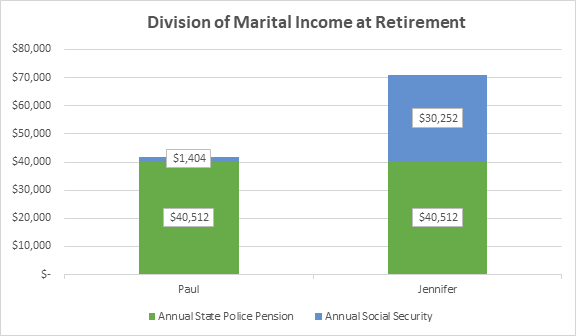 At retirement, each would receive one-half of the marital portion of Paul’s pension ($3,376/month or $40,512/annually). Additionally, Paul would collect just $117/month ($1,404/year) in Social Security benefits (diminished as a result of his employment with the State), while Jennifer would collect an additional $2,521/month ($30,252/year) in Social Security benefits. In total, Paul will receive $41,916 annually while Jennifer receives $70,764. This is certainly not equitable. The actual division is not 50/50 but closer to 63/37 in favor of Jennifer. *The monthly totals above are actual figures and not estimates.

Summary: When we are able to view the long-term implications of a given asset-division proposal, it becomes easier to recognize the financial inequality than can result from even a seemingly equitable divorce agreement. Unfortunately, many divorces involving State Pensions will have results that look similar to this without changes. Family law attorneys and the Courts need to recognize that ongoing contributions made by the State employee toward their pension benefit, replace what otherwise would have been contributions toward their Social Security benefits. To consider the entire State Pension benefit accrued by one spouse as a marital asset while at the same time completely excluding the value of any Social Security benefits accrued by the other spouse, is short-sighted and financially harmful.

About Adam: Adam Waitkevich is the President and Founder of Divorce Financial Solutions, LLC located in Westborough, MA. In his role as a Certified Divorce Financial Analyst (CDFA®) and a Certified QDRO Specialist™, Adam assists individuals and their divorce professionals in making better financial decision in divorce. Since 2010, Adam has assisted with hundreds of divorce cases as it relates to asset-division, pension valuations and QDRO preparation. For help in bridging the financial gap in divorce, you can reach Adam at 508-839-3730 or learn more at www.divorcefinancialsolutions.net.